What is Klout and why should you care?

Last week, September 27th, Microsoft Bing (Microsoft’s search division) announced that they are partnering with Klout to “help enrich the discovery and recognition of influencers across our platforms”. As you are probably aware there is an ongoing competition between the Internet search engines. Microsoft is investing heavily in their search engine Bing to increase market share and take over Google’s place as number one on the podium.  Since we as humans are much more inclined to listen to, and take advice from other human beings, especially people we trust, linking search results to social networks is a critical development for search engines. Google is investing in their social network Google+, and Microsoft is working closely with Facebook and other social networks. This newly announced partnership with Klout will take the social aspect of search even further. So what is Klout and why should you care?

Klout (www.klout.com) collects and analyzes people’s activity on various social networks such as facebook, twitter and LinkedIn, and calculates a “score” based on one’s level of influence. The company Klout was founded in 2008 in San Francisco by Joe Fernandez in his early thirties. He got the idea in 2007 when he had a jaw surgery and was unable to speak for three months. During this time he was very active online and he realized how powerful word-of-mouth recommendations were for influencing others’ behavior. He started thinking about ways in which this online “influence” could be spread farther and faster.

What is the Klout Score?

Based on your activity and the associated activity by others (such as comments and sharing of your posts and links) on social media sites, Klout uses an algorithm to calculate a score for you. The social networks that currently have an impact on the score are Twitter, LinkedIn, Facebook, Google+, Foursquare, Wikipedia and Klout itself. The Klout score can range between zero and one hundred, one hundred being the most influential. An “average” score (according to Klout) is forty. Big influencers like Bill Gates and Barack Obama have Klout Scores 90 and above. 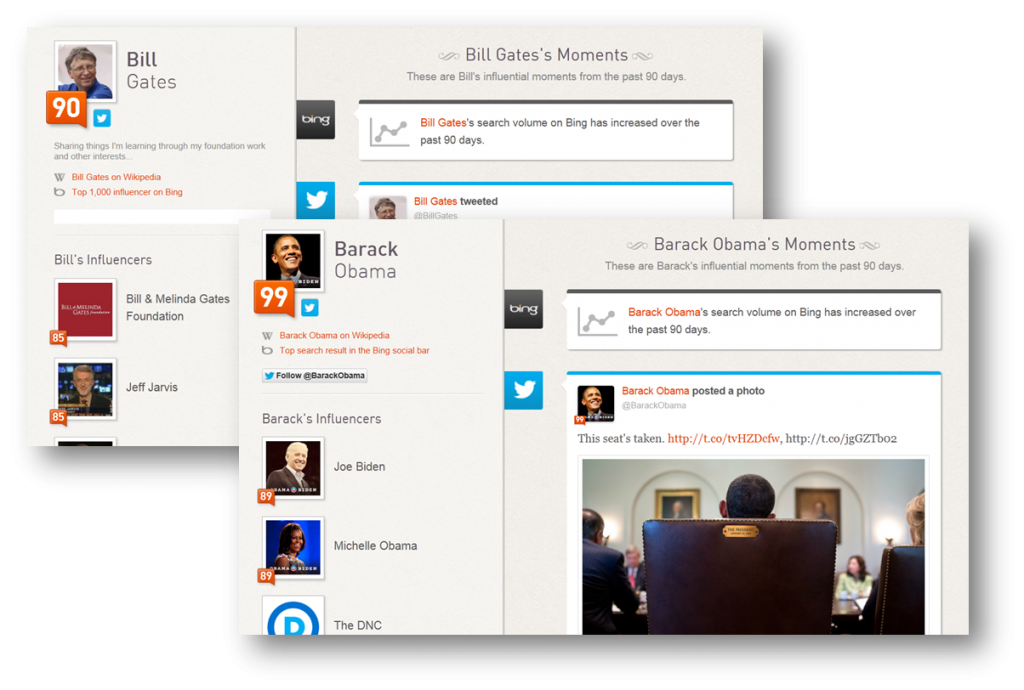 To get started with Klout 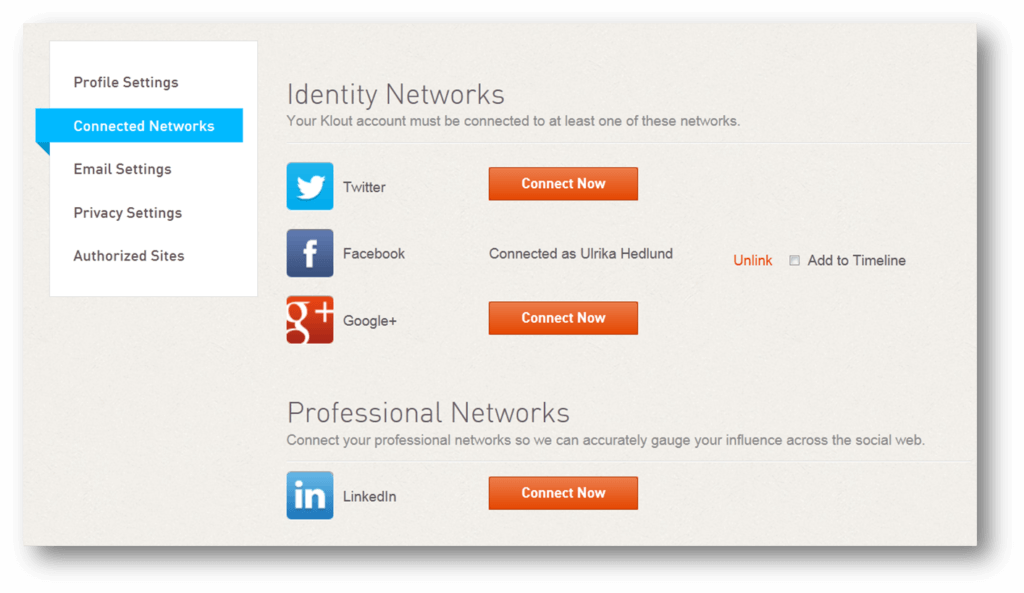 Even though only a limited number of these networks currently contribute to your Klout score, you can choose to connect additional networks. According to Klout, they will add more networks to their scoring algorithm later on when they have done more research on the impact. 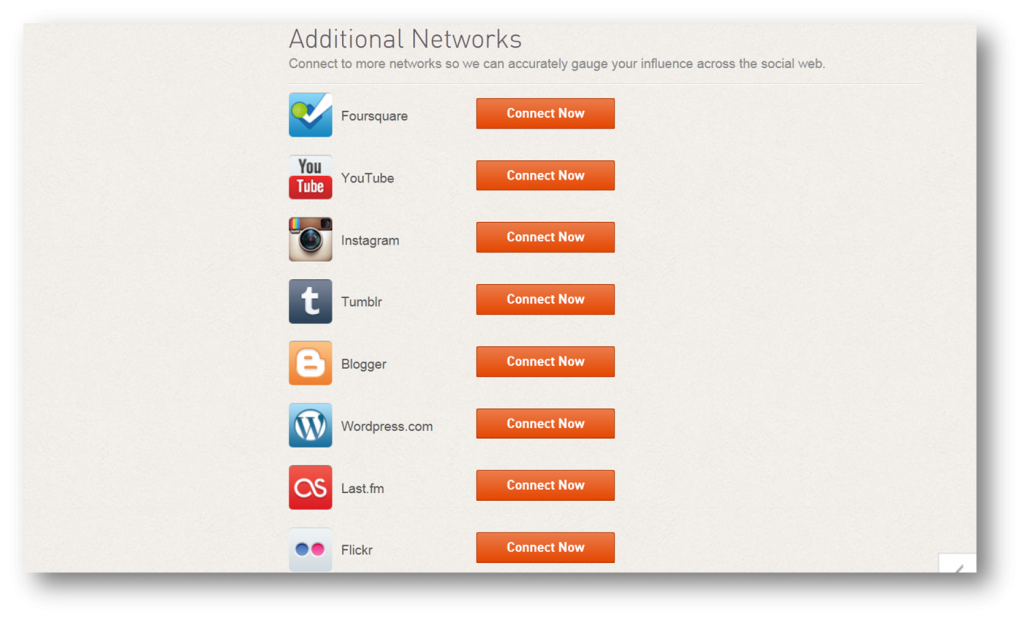 In addition to connecting social networks to your profile, you can also add “topics”. Topics are your area of passion or expertise. Klout suggests topics for you based on your social media content, you can also add your own from a list of pre-defined topics. 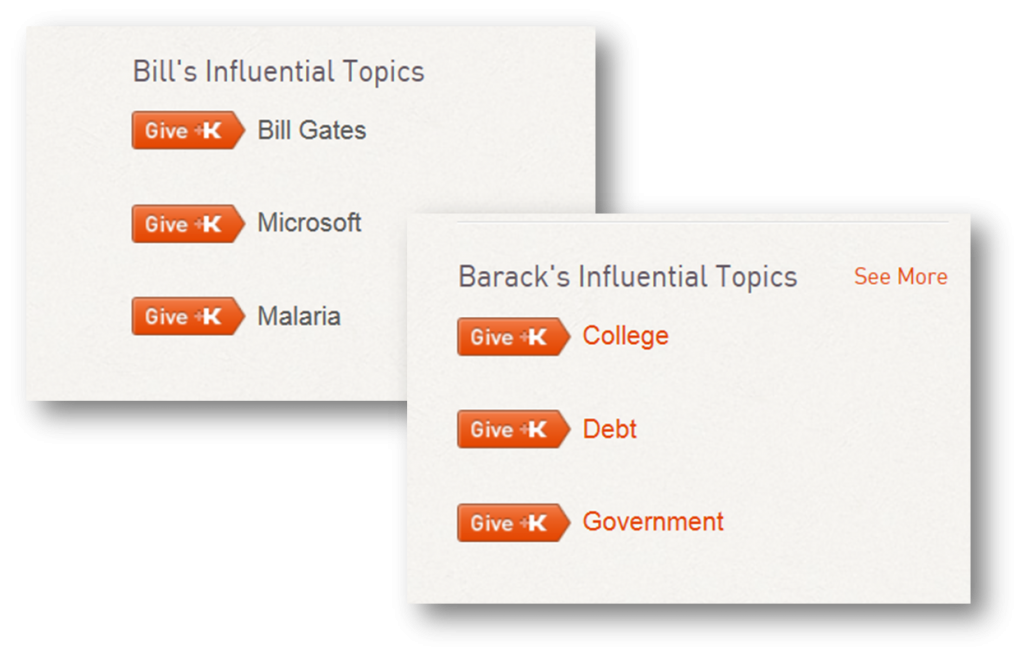 In May this year, Microsoft introduced the “social sidebar” to Bing users in the United States. The social sidebar connects Bing to your social network so that you can get input on your searches from your Facebook friends and other experts. Say for instance that you want to search for a restaurant in Chicago. Bing analyzes your Facebook friends; their location, their “likes”, their posts, etc. as well as bloggers and critics, and recommends people who might know more about restaurants in Chicago.  Microsoft’s partners that contribute to the social sidebar include Facebook, Twitter, Quora, Foursquare – and now Klout. Klout scores and topics of experts will be visible in the Bing social bar so that you can see how influential they are (according to Klout). 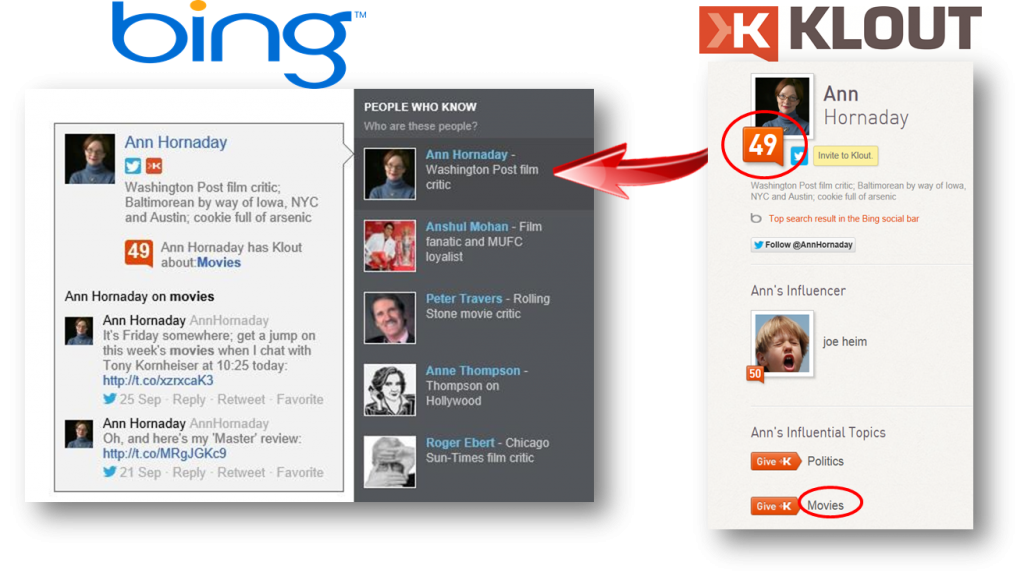 In addition, Bing search results will be incorporated into Klout to calculate the Klout influence score.

Klout has stirred up a lot of emotion within the social media community. Though many people welcome analytical tools to measure the impact of social media involvement, many also question the accuracy of the Klout “score”. One example that was brought to attention on the inaccuracy of the scoring was that the young pop star Justin Bieber had a higher influence score than Barack Obama (this was before Klout updated their algorithm). There have also been concerns about privacy and lack of transparency.

Whether or not you believe in the Klout score it’s out there and with the Microsoft partnership and Microsoft investment, Klout will become a more important player. Your Klout score can be of benefit to you, there are numerous examples of people who have experienced better customer care due to a high Klout score. However it can also be used against you, there are stories about job applicants who have been turned down due to them having a low Klout score.

I welcome the efforts

As an engineer, I’m passionate about calculations and facts. I understand that calculating something as intangible as “influence” can never be exact, but I welcome the efforts and the continuous improvements that Klout are delivering. I’m excited about the partnership and I hope that it won’t take Microsoft too long to roll out the social features of Bing to the rest of the world.